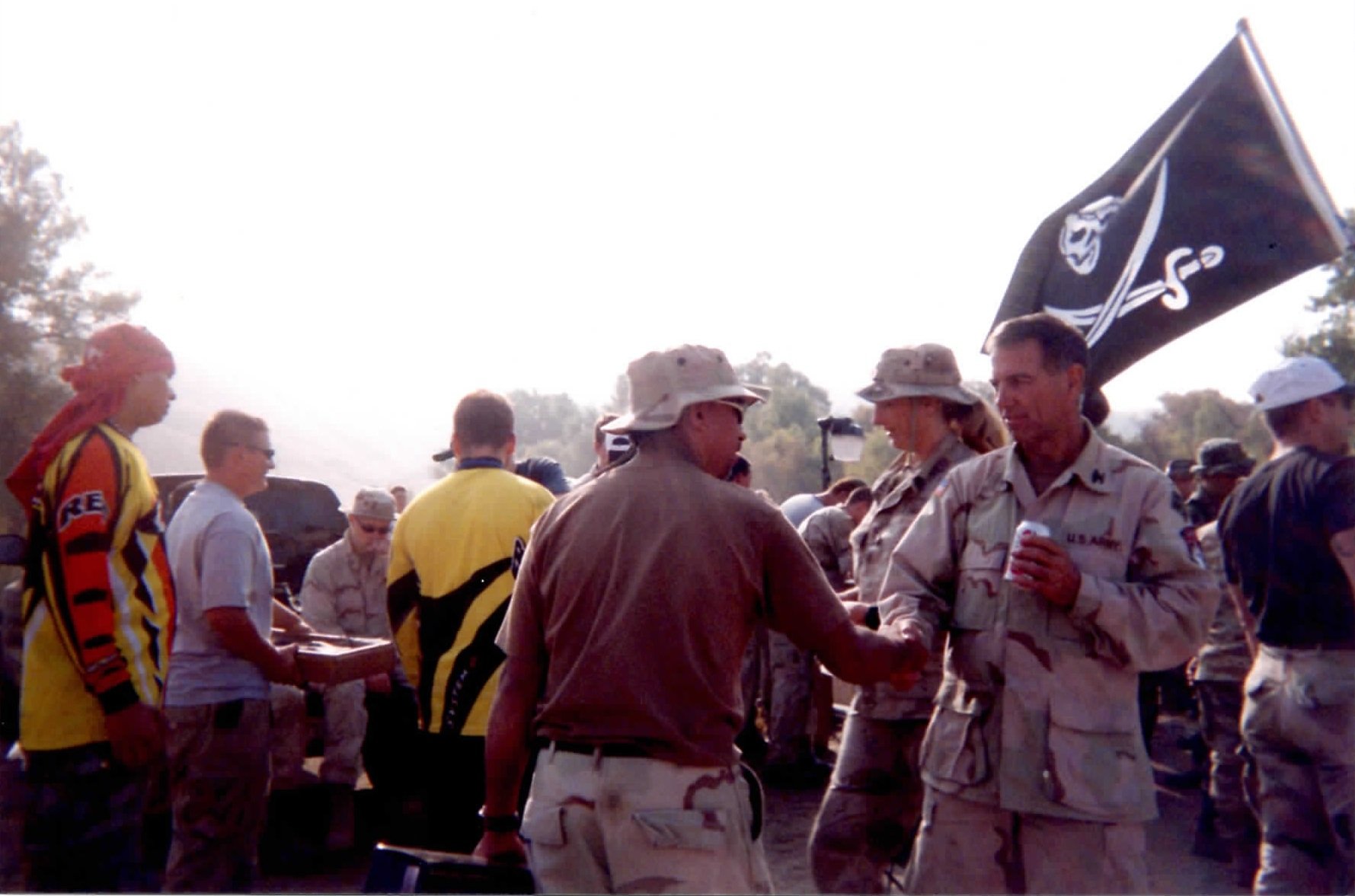 Firstly, I would like to say how thankful I am to John Lu for deciding to have the first Operation Lion Claws right near where I grew up just outside of Bakersfield, CA at what used to be known as Target Zone paintball right along Poso Creek. I honestly had no idea how big of a series this was going to be when I first signed up, I just remember feeling overjoyed that Col. Danny Mcknight was not only going to be commanding a force of airsofters in a mock battle but that he would be doing so in Kern County!

Another huge part of why I was so excited for this event was that I had just finished reading a book about LRRP units in Vietnam and I’d never met anyone who had served in one of those units. LRRP stands for Long Range Reconnaissance patrol and their job was to insert very far behind enemy lines with little to no support in order to ambush, conduct raids, and generally harass the enemy in what they considered their own “back yard.” Sgt. Ken Miller was true to the stories I’d read and it amazed me beyond measure to see a gentlemen who many might consider to be a retirement-aged male run through a forest littered with dry leaves and trip wires connected to airsoft mines and not only did he not make a sound but he didn’t trip a single mine. He also speaks fluent Mandarin. I was in hog heaven! 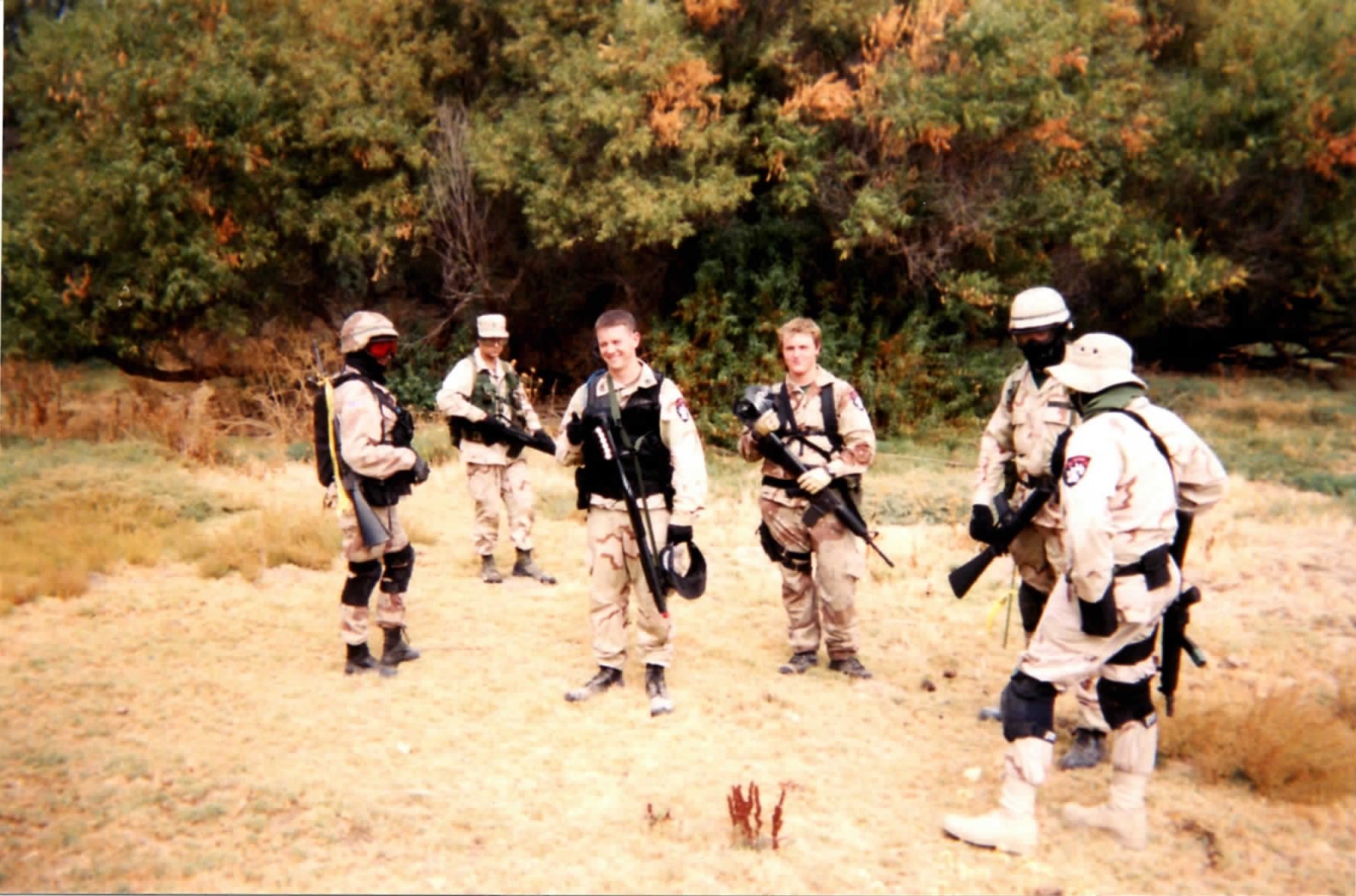 As far as my gear was concerned, there were quite a few changes I’d made to my gear by this point in time. By the start of Operation Lion Claws I, I was still using the Tokyo Marui M16A2 that I purchased at Operation Iron Angel, I had also added an older style M203 grenade launcher onto said TM M16 and I had also purchased a Tokyo Marui Benelli M3 spring shotgun. Other notable purchases include extra magazines, a Blackhawk crossdraw vest, a sling, and one gas grenade for the M203. I honestly wish I had purchased more than one gas grenade for the M203 but when you have a limited amount of funds you work with what you’ve got. I also had to scrounge together some funds to cover my 3-color desert uniform which was required for the event since I was in Colonel McKnight’s Alpha Company.

Another interesting point of this story is that I was also a squad leader for this operation and since this operation was only 40 players vs 40 players, I was in charge of a quarter of Col. McKnight’s total force. I was able to do this by checking the box on the Operation Lion Claws registration form asking if I wanted to be a squad leader and listing previous operations I’d been to at the point. Now, this is just a guess but I think I was chosen because I was probably one of the few people who had been to an airsoft operation before, but again that’s just my best guess. Luckily, I had my good friend Chris Dane in my squad along with Robert and Seth Booher, all Kern County residents. I also had six other squad members that were from all over the state including one teammate who flew in from the east coast for this game, which was unheard of for me at the time, so I was justifiably excited to get on the field and get some airsoft action. 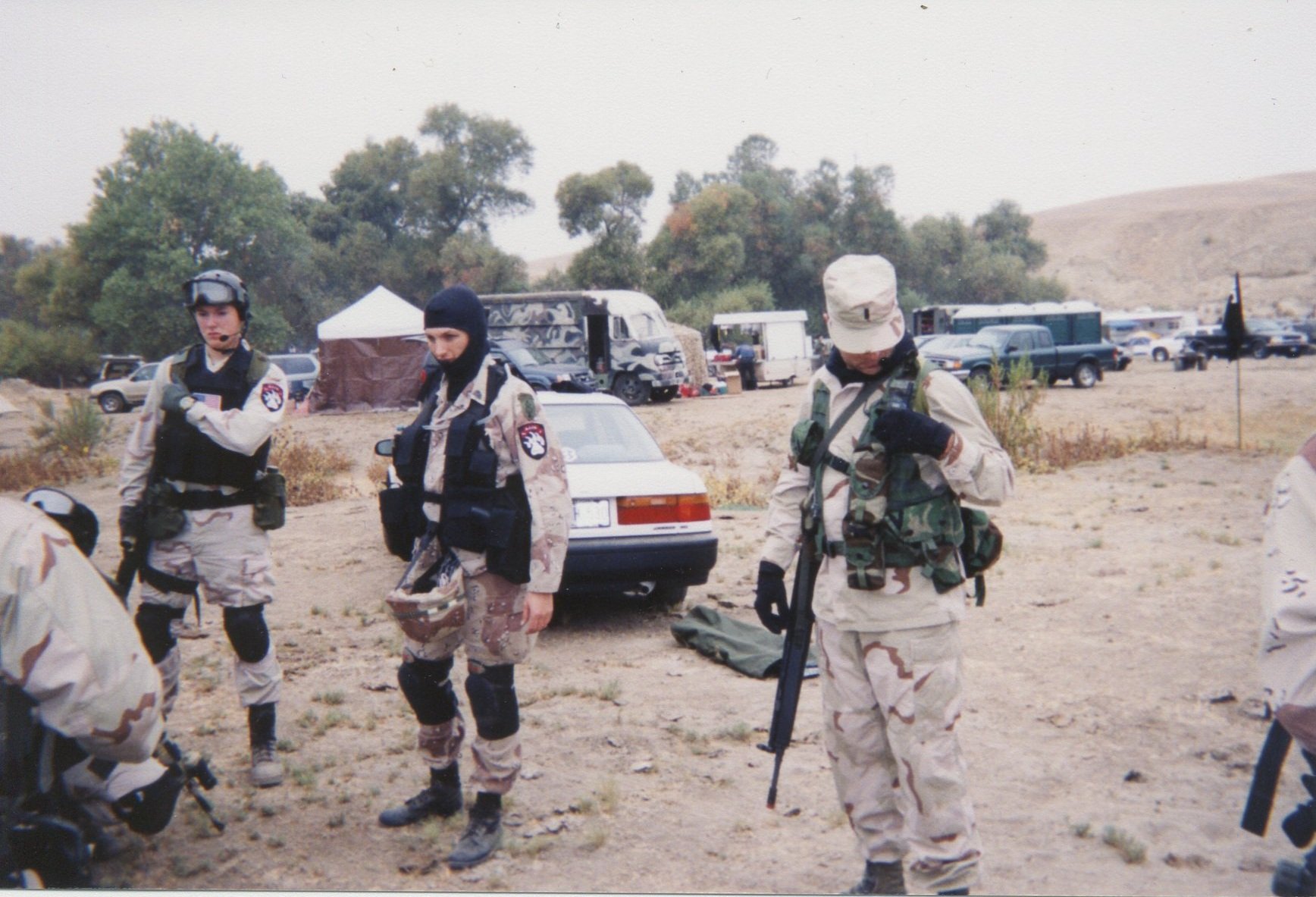 As far as my platoon commander, I can’t say enough nice things about him. Helmut Fritz was in command of my platoon that weekend and I always like running into him at other operations because he’s just one heck of a nice guy who loves getting out and playing airsoft. He was also enlisted in the US Army during the Cold War and his expertise was invaluable during Operation Lion Claws. He is also a huge fan of several very nerdy table top games including Dungeons & Dragons which upped his street cred with me right from the get go. 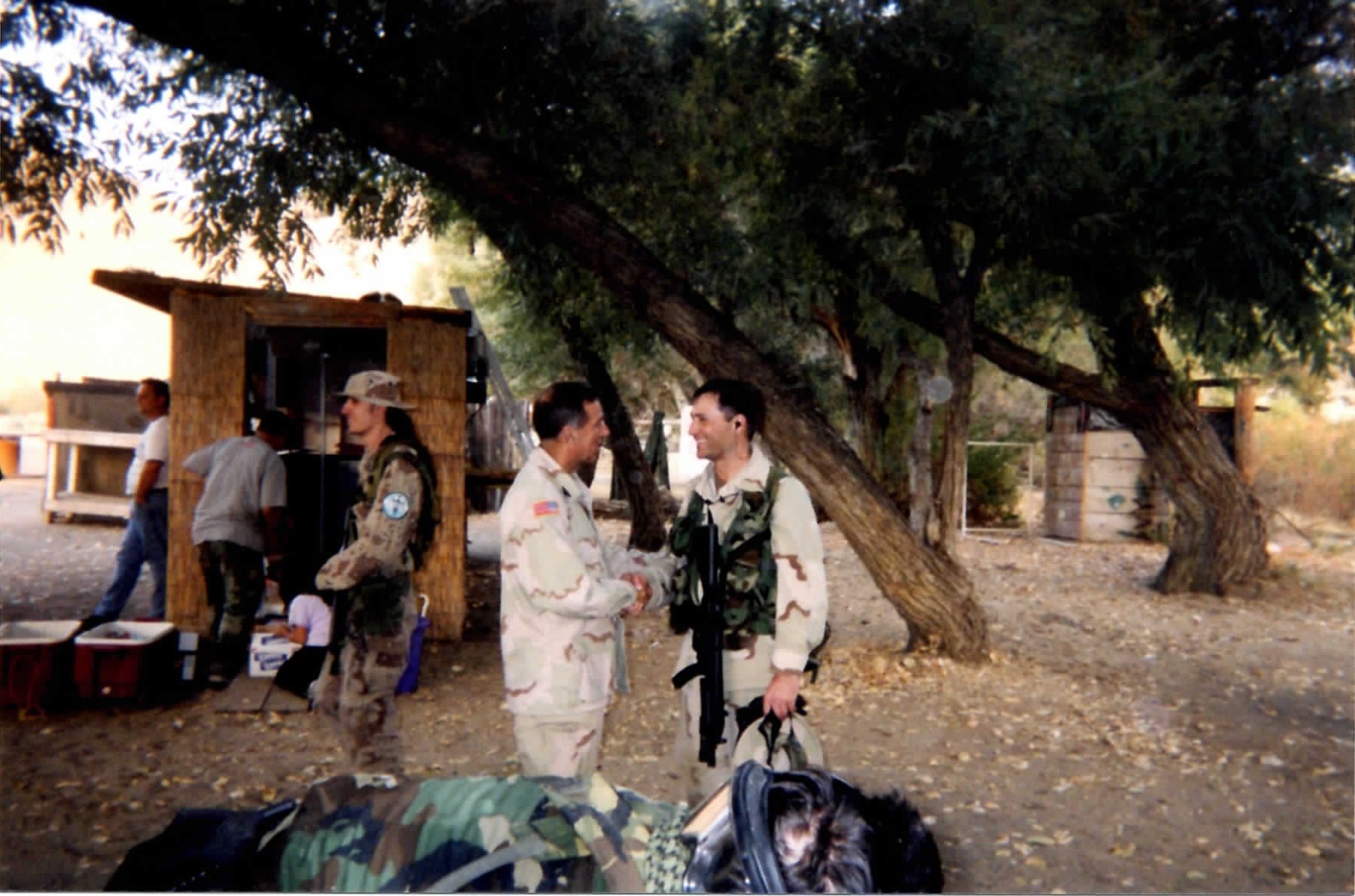 Now I’m not going to go into too much detail of the actual combat because that wasn’t as impactful for me as it was just being in the presence of American legends such as Colonel Danny McKnight and Sgt. Ken Miller. One of the things I took away from that weekend is what it feels like to respect your commander and have him respect you back. A good example of this is that anytime there was a break during the day Col. McKnight was walking around talking to the men and women of Alpha Company, asking how the last evolution went for each squad, seeing if everyone was in one piece and ready to go for the next mission, and generally giving advice on what to do in the field. I can honestly say I now understand what having a good commander looks like AND feels like. Most of us were beat to hell that weekend, but not a single one of us thought about going home early. We were there to have fun and kick ass and we certainly did quite a bit of both.

Two other things I learned that weekend were the importance of communications, and knowledge of the local terrain. During the event, radios were immensely important as part of the field we were playing on was thick with vegetation and coordinating platoon movement by sight was almost impossible. Maps combined with communications can be almost as important as what kind of gun you’re carrying in certain situations, which is why for the second evolution I elected to use my TM M3 Benelli spring shotgun and it wasn’t as big of a disadvantage as you might think. For that game, my squad was mostly fighting in the jungle section of the map so that the lack of range on my gun wasn’t really a hindrance whereas the 3-shot spread on my gun was a distinct advantage. 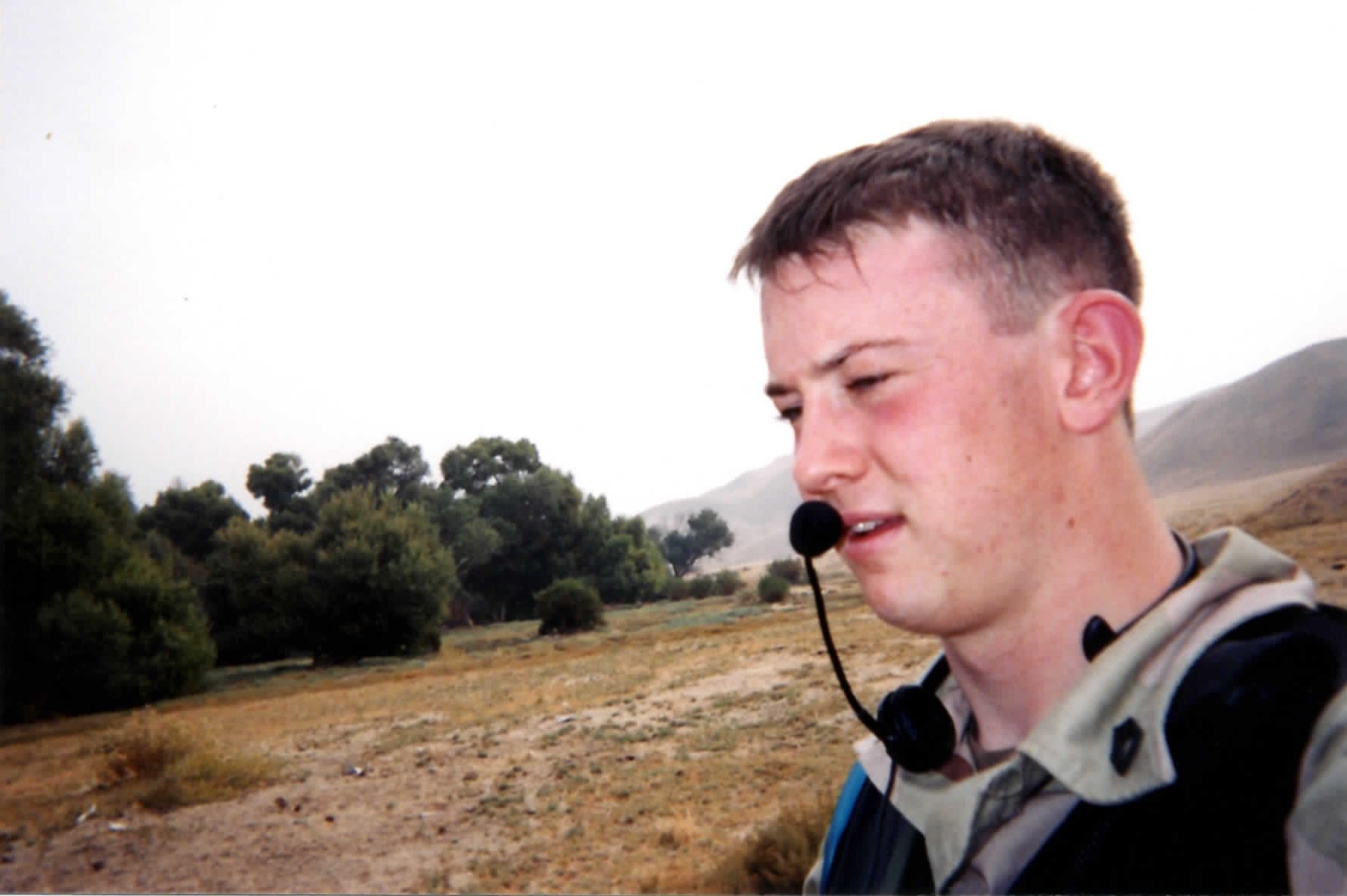 As far as knowledge of the local terrain was concerned, there were two instances in which my knowledge of the layout of target zone paintball was immensely helpful (or at the very least informative) to Alpha Company. During the night game, we attempted to push one of our platoons right through the center of the field along a dry creek bed. I advised Col. McKnight as to where the creek bed curved, where it might be best to exit the creek bed quickly and quietly, as well as where the most likely ambush spots were. Now, I don’t know how successful that platoon was because I was fighting over a different part of the battlefield but I do know that we did get support from them later that night, so at least some of that force made it to their objective intact and ready to fight. Another instance in which my knowledge of the local terrain came in handy was when I informed Col. McKnight of the location of the “castle”, a two story structure that slightly resembles a medieval fortress. I also made it clear to him that whoever captured it first was more than likely to hold it for the rest of the game, as it had excellent fields of fire and was extremely difficult to breach. Colonel McKnight hear me out and ordered our entire team to get to the Castle as fast as we could, but even that wasn’t enough. Bravo got there first and, just like I’d forewarned, held it against every assault that we mounted that evening.

Something that is not very well known in the airsoft community is that the CEO of Airsoft GI actually airsofts. Unbeknownst to me at the time, I actually fought side by side with him while he was working as one of Col. McKnight’s “bodyguards” for the entire weekend. He was also one of the few bodyguards that Col. McKnight humorously used to find out where exactly the mines were on the trail he was using. Eventually, Col. McKnight ran out of bodyguards before the event organizers ran out of mines so the good Colonel decided to chose another route.

One of my favorite stories from that weekend involves a very cheap watch I bought for Operation Lion Claws so I could keep track of how long it would take to re-spawn. As I was leading my squad through one of the areas of the field that had less vegetation, I had the premonition that it was more than likely that there were snipers nearby watching us. Now, my squad ranged from experienced players, to paintballers getting into airsoft, all the way down to complete noobs. Regardless of their experience level everyone was grouped up around me noob-style (as close as possible while ignoring all use of available cover) and I had to fix this fast. I began by ordering my squad mates to spread out and take cover in case there were snipers near by. I had time enough to place half of my squad in cover when I was shot by a sniper. Now for what happened next, I really have to give my squad credit, especially the noobs and paintballers, because a few people yelled “Sniper!” at the top of their lungs then two teammates began dragging me into cover as the rest of my squad opened fire on the source of the shot. I was dead but I was still really proud of how they reacted. For me, the icing on the cake is that I didn’t feel the sniper round hit me because it smacked dead center into my cheap ass watch, which I kept as a memento and somehow still functions to this day. Regardless of cost or build quality, it just wouldn’t give up, just like my squad.

A lot of fun times were had that weekend including the infamous watch incident, but more than anything I came away with a few more friends, a fair amount of useful airsoft knowledge, and a heck of a lot of amazing memories. 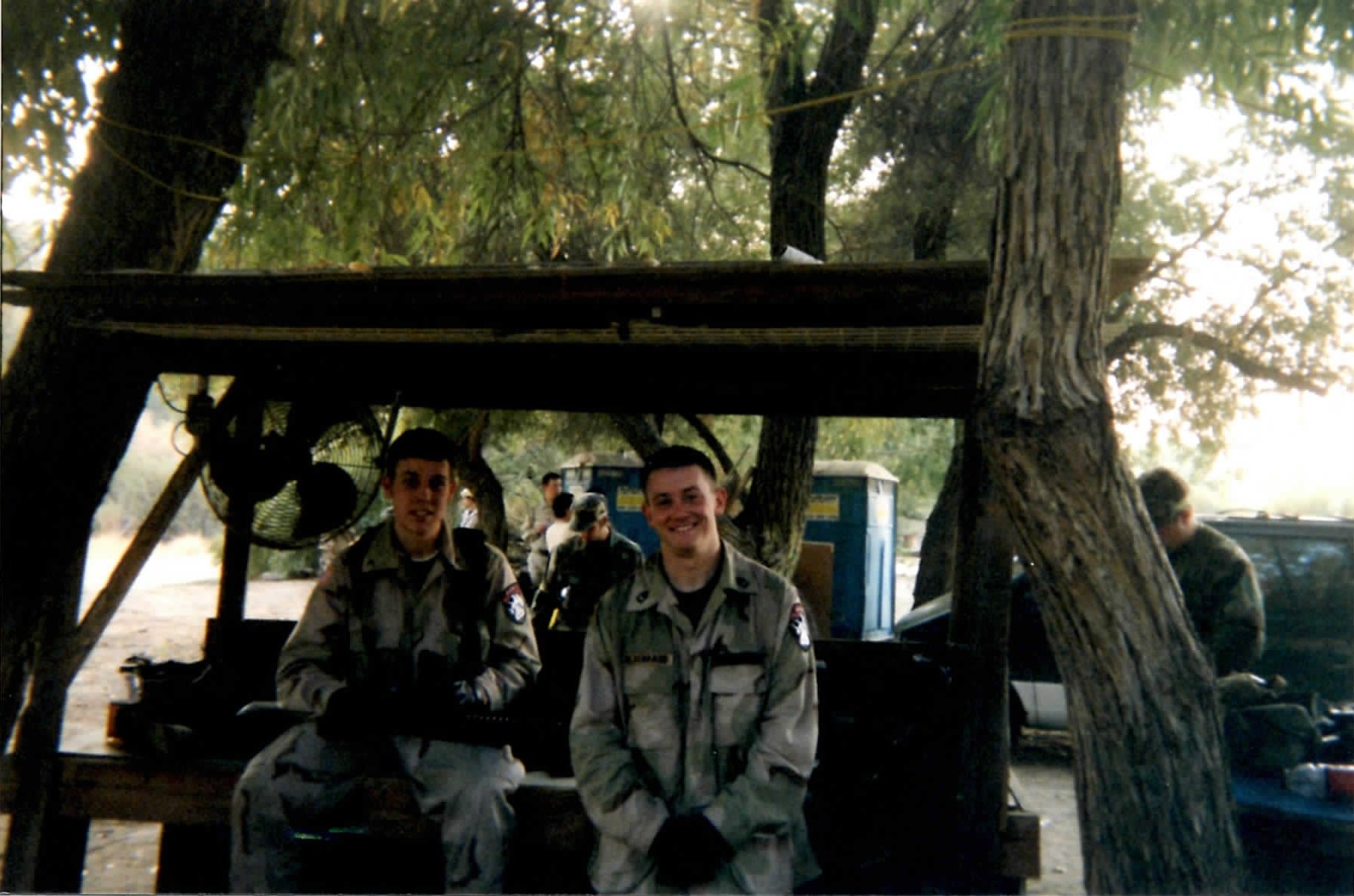 On one last note, John Lu forever won my patronage of his events when he sent me a Christmas card later that year thanking me for participating in Operation Lion Claws along with photos of Col. McKnight and Sgt. Miller from the event. From the bottom of my heart, thank you John Lu for throwing events like these.