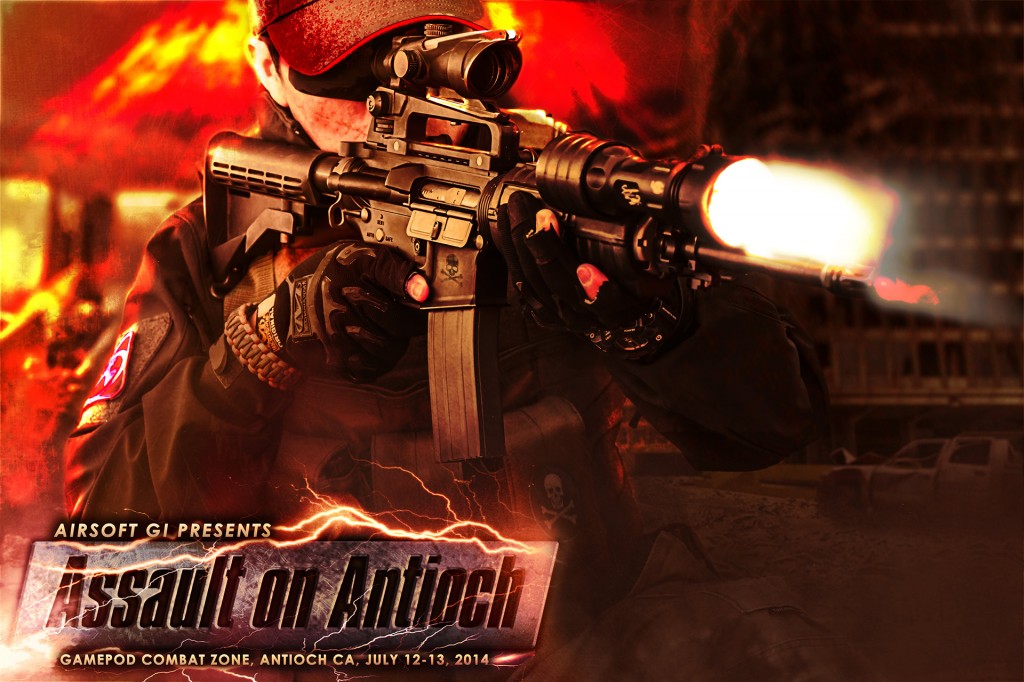 A lot of folks who were not at Assault on Antioch were curious how the game was setup and what the specific objectives were. To give an overview, I’ve decided to post the Warn Order that was issued to game control in order to give a fuller view on what the weekend’s objectives were.

Before you read the Warn Order you might as well check out our first teaser video showing off some of the action footage from the game: Well, without further ado, here is the Warn Order:

A super volcano has erupted out of Yellowstone National Park, covering the majority of the United States in ash and darkness for an estimated three to five years. This has affected all aspects of normal every day life. Food prices have skyrocketed as crops are destroyed due to lack of sunlight. A majority of animal life in the Western United States is no longer able to sustain itself in an eco system that has been ripped apart, and the fabric of civil society has been rent asunder with the complete collapse of local and state governments.

Emergency sustainment zones have already been quietly built all across the United States for the continuation of the American way of life in just such a disaster. Unfortunately because of widespread civilian casualties and a nation-wide communications breakdown due to the volcanic eruption, basic civil services, power, as well as water infrastructure, along with the rule of law have collapsed all across the Western US. Groups of armed civilians flock to the last remaining shelters against devastation on the West coast.

The last remaining emergency sustainment zone remains open and untouched in Antioch, CA. Two caravans of armed civilians now head toward its fully stocked caverns from both the north and the south with room enough for only one group. The fight is on for survival. Do you have what it takes to weather the storm?

For information about required EYE PROTECTION and Airsoft gun FPS LIMITS, please scroll to the bottom of the page and click on the link to Gamepod Combat Zone’s FIELD SAFETY RULES for more information.

-Recon: Each side must identify and mark down the correct location of the following facilities on their team map by the end of the game: Water Purification plant, Food Processing Facility, Small Arms Warehouse, and Vehicle Bay.

-Resource Gathering: Each team must recover any and all water bottles, purification tablets, grain bags, and MRE’s in the allotted time.

Objectives: props will be scattered randomly throughout the field. Each side will have a supply cache which is where all mission objectives will be dropped off. It will not be at the spawn and can be raided. 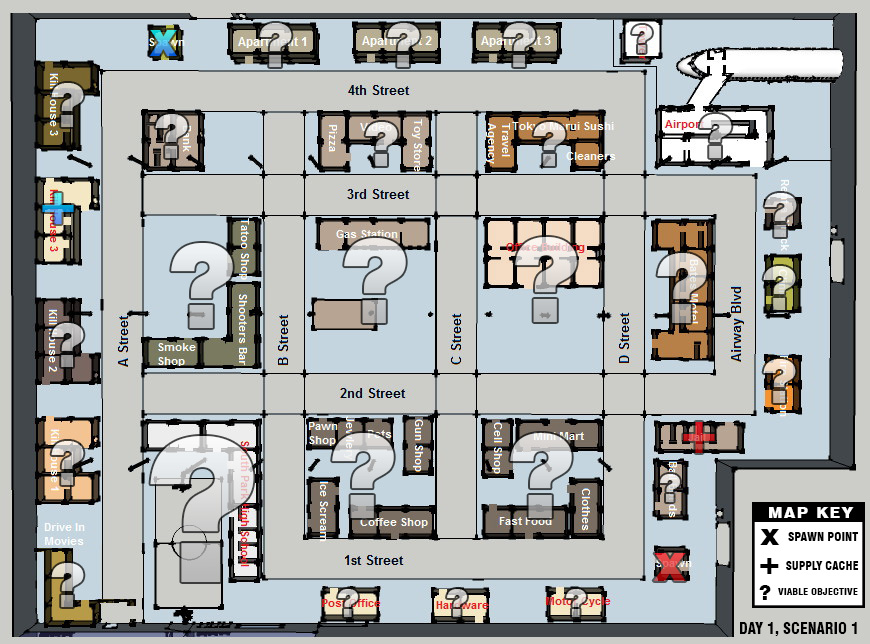 -Demolition: Each team must attempt to destroy the enemy’s main supply cache by detonating the opponent’s building using a detonator provided by Gamepod staff.

-Recovery: Each team must attempt to control the Water Purification Plant, Food Processing Facility, Small Arms Warehouse, and Vehicle Bay by the end of the game. 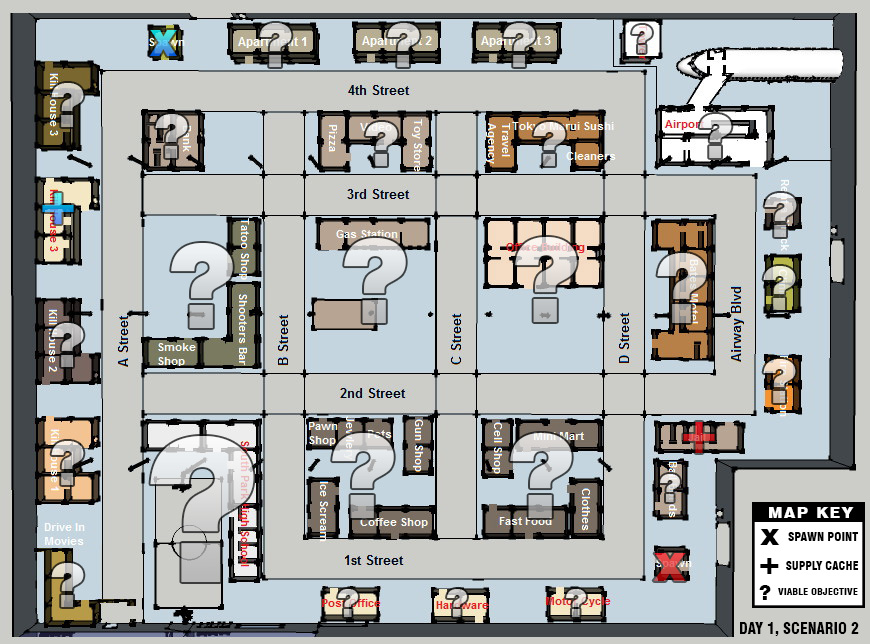 -Entry Codes: Each team must attempt to secure the entry codes to the underground facility by the end of the game. These codes will be located in a special hard case and will be extremely hard to access. The team that owns and manages to open this case by the end of the game will have the privilege of starting on the field on Day 2.

-Emergency Exits: Each team must attempt to locate the door codes for the emergency exits as a contingency plan in case they are unable to secure the entry codes for the underground facility. The amount of emergency exit codes will determine how many entrances the losing team will be able to use on the following day. There are a few very special emergency exits known only to a select few…

Objectives: 1 hard case with multiple locks that have out-of-order combinations written on them and one set of entry codes inside the case. 6 emergency exit codes will be located on the field in standard gun cases. All cases must be placed at supply cache when secured and can be stolen. Cases will be randomly scattered throughout the field by Gamepod Staff.

Melee Kills: These kills are not only allowed, they are encouraged. Foam weapons such as Nerf melee weapons (Foam tomahawks, swords, axes, etc.), fake rubber bayonets, and homemade soft melee items are all useable. If you are unsure if you’re melee weapon is safe to use, do the right thing and ask Gamepod staff for guidance. In addition, please do not swing for the fences when going for melee kills. A tap on the shoulder or a gentle prod with a melee weapon should suffice.

Capture: Capture rules will not be in effect for this game

Medics: Medic rules will not be in effect for this game

Vehicles: These will be available during Scenario 3 to the team that held the vehicle bay at the end of the game during Scenario 2. Vehicles can be destroyed by a single c4 charge that has been activated, as well as a Rocket, or an Artillery hit. Once a vehicle is hit, it is out of action for 10 minutes.

Bandits: Bandits may enter the field in either the large or small buggy during scenarios 1 & 2. Bandits consider everyone hostile. Bandits will be played by Gamepod staff, Spartan imports staff, or GI Staff.

-Breach and Clear: The losing side from Day 1 will start outside the facility and will use their emergency exit codes to enter the facility at will from secretly chosen entrances. This force will be tasked with securing their respawn location and holding as many buildings as possible by the end of the game. The winning side from Day 1 will be tasked with holding as many buildings as possible, preventing the opposing side from taking and holding additional buildings, as well as securing their own respawn point. The side that starts in Gamepod (i.e. the side that was victorious on Day 1) will have the advantage of being able to secure their own respawn point first (before the game starts).

Referee Note: At the end of this scenario each player occupying a building must stay in place until counted by referee staff to be sure whether or not a building is under control. Once players are counted they may return to their ready room and re-arm. 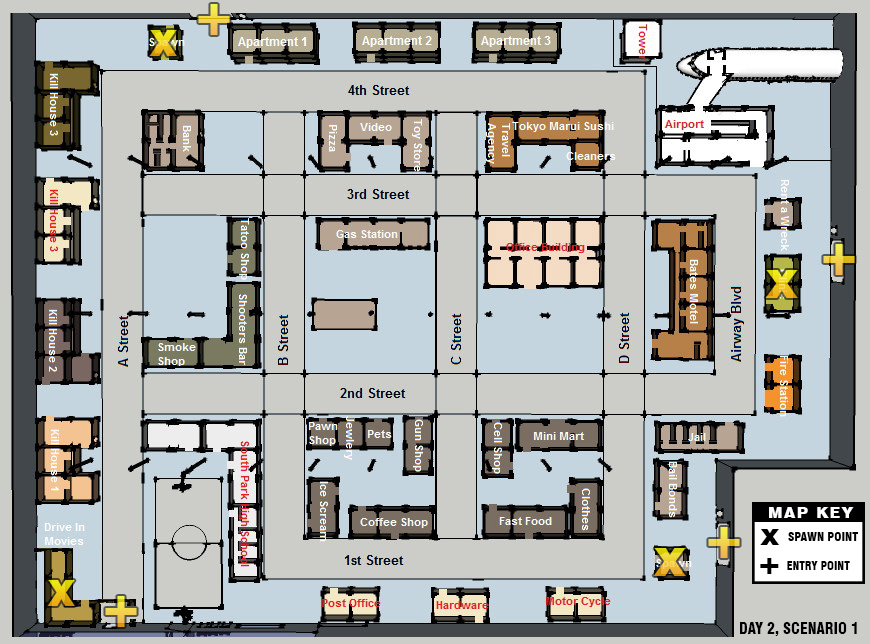 -Demolition: Each side is tasked with destroying key command and control buildings in your enemy’s area of operations. Team Command and Control Facility shown on the map with a C (Blue for Bob, Red for MSJ. Can be changed on day of event due to location of team spawn) Note: Supply caches are not in use for this scenario and respawn locations are determined that day. 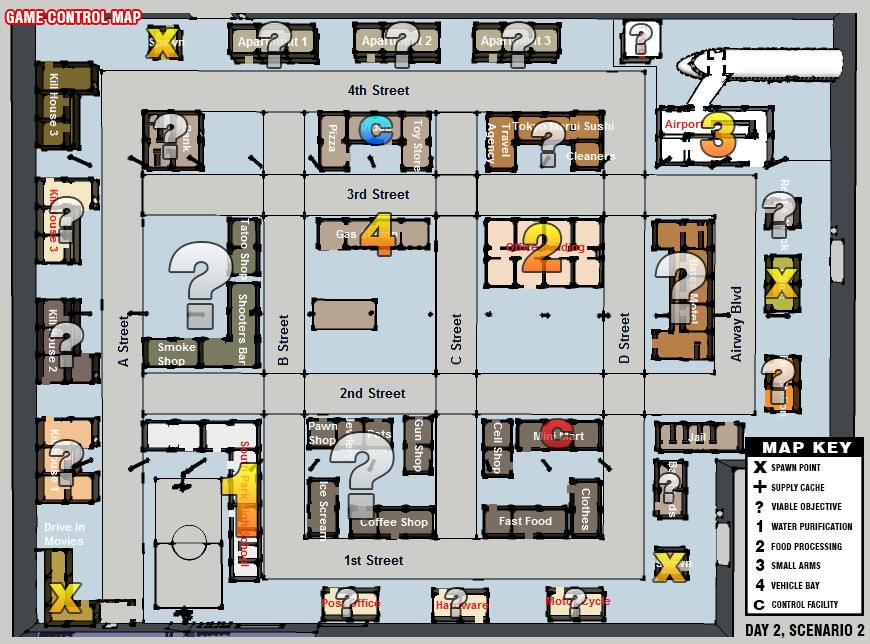 Scenario 3: There is only War

-There is only War: This is an all out assault to control the majority of the field. Both sides will have 5 objective buildings scattered throughout the field that they must control by the end of the game. Vehicles will be available to the side that controlled the vehicle bay in the previous Scenario. The side that did not control the vehicle bay will have rockets, c4, and possibly artillery at their disposal. The side that holds the most buildings in this game will count as securing the facility and will be declared the winner for the weekend.

Melee Kills: These kills are not only allowed, they are encouraged. Foam weapons such as Nerf melee weapons (Foam tomahawks, swords, axes, etc.), fake rubber bayonets, and homemade soft melee items are all useable. If you are unsure if you’re melee weapon is safe to use, do the right thing and ask Gamepod staff for guidance. In addition, please do not swing for the fences when going for melee kills. A tap on the shoulder or a gentle prod with a melee weapon should suffice.

Vehicles: These will be available during Scenario 3 to the team that held the vehicle bay at the end of the game during Scenario 2. Vehicles can be destroyed by a single C4 charge that must be placed on the vehicle then activated by turning on the red LED light on top of the C4. Vehicles can also be killed by one hit from either a rocket or a rocket launched by the Gamepod Artillery. Once Killed, vehicles are out of action for 10 minutes.

Rockets and Artillery: In addition to taking out vehicles in one shot, if a rocket lands in a room, everyone in that room is dead. Players in rooms adjacent to that room are still considered alive and may continue playing. Furthermore, if a rocket detonates outside a building, everyone within 15 feet of the impact zone is considered “dead.”

Bandits: Bandits can enter the field randomly in vehicles during scenarios 1 & 2 and consider ALL players hostile.

Capture: Capture rules will not be in effect for this game.

Medics: Medic rules will not be in effect for this game.

Make sure to stay tuned to our main youtube channel as well as GITV Uncut where will be uploading smaller snippets of the action purely for your enjoyment!