National Geographic Television announced this week that Barrett and its founder, Ronnie Barrett, along with son and daughter, Chris and Angela Barrett, will be showcased in a one-hour documentary on Monday, June 27th at 8:00 p.m. Central Time.

“SNIPERS, INC.” covers Ronnie Barrett’s invention of the famous .50-caliber rifle back in 1982 and how the business evolved into its current state-of-the-art world headquarters.

Two new Barrett rifles, not yet released to the public, are included in the documentary: M107A1, which is a modification of Ronnie Barrett’s original M82A1 (adopted by the United States Army in 2002) and the MRAD, a rifle designed by Chris Barrett.

The M82A1 is available for Airsoft, fully licensed by SOCOM Gear.
Information on this rifle can be found at www.socomgear.com/m82a1 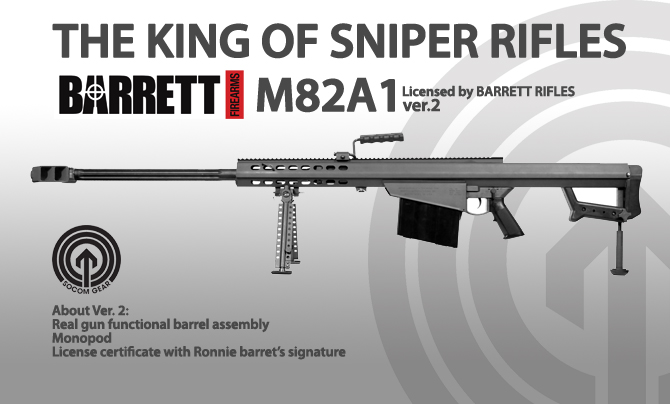