Why Speedsofters Fail at Milsim

Wait! Before you lose your minds and say MISLIM sucks and have a milsim’er play SpeedQB, hear me out. Between SpeedQB and MILSIM, most would consider them to be on complete opposite sides of the airsoft spectrum. That Speedsofters would suck at MILSIM. I never hear that Milsim’ers would sucks at SpeedQB, but that will be part two. The competitive side of players would immediately challenge the idea of someone claiming that they “suck” at a specific style of game play, especially when they are considered to be polar opposites. Is it that hard to believe that a player would have difficulty playing a style that they are not familiar with? Here are a few reasons why MILSIM, or Military Simulation would be difficult for Speedsofters.

With the MILSIM style of game play, some of the tactics will be a little different. In SpeedQB, it is usually room clearing, moving from bunker to barricade and trying to out maneuver your opponent with speed. Whether its rushing with fire or running around to flank, your speed plays a huge factor in your success. In MILSIM, there is so much more going on beyond the structure of teams and your chain of command. Each player typically has a role to play. Roles such as rifleman, grenadier, medic, scout, and sniper all have different jobs. Depending on what your role is, you will change how you play in the context of the larger team.

Then we have differences in the playing field itself. At MILSIM events, you are usually at a very unique AO or Area of Operations, somewhere like a shut down factory or a unused neighborhood with multiple buildings and complexes. Usually there will be wide open areas with nothing to use as cover. This may prove to be difficult as Speedsofters might not know how to coordinate and move from building to building. Having to perform much larger flanking maneuvers might not work if there are enemy teams in buildings past your target. Once  inside CQB tactics will dominate. However, it will still be different from the bunker to bunker style they normally play. The larger manuever warfare aspects of gunfighting make a substantial difference in larger scale simulated combat than what a speedQB player typically encounters.

In SpeedQB it is a competitive style adapted from Paintball. Usually it will be Team Death Matches that will last a few minutes, sometimes seconds. As for MILSIM, they can run anywhere from 6-48 hours! Even with the Milsimers that have a “High Speed, Low Drag” mentality, they will usually carry more supplies in preparing for the event. With Speedsofters, they usually have a very minimal load out to maximize their speed and maneuverability.  They keep only magazines and gear to hold what they will need in a shorter gun fight. If this is the mentality that is used when preparing for a MILSIM event, you will be at a very huge disadvantage and probably won’t have enough supplies to last more than a few hours. It’s important to know what your role will be at the start, and make sure you have what you need to last the whole game. If SpeedQB is a sprint, MILSIM is the marathon. 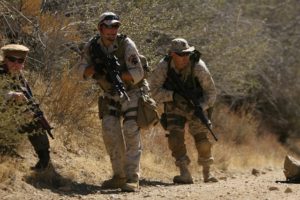 I think it is safe to say that most airsofters will upgrade their guns to get the best performance . Whether that is to maximize range, accuracy, trigger response, and rate of fire, Most players are performance minded. I listed range as the last problem because if you have the right tactics and gear I believe you will be able to play a MILSIM event successfully. Since tactics are more important than raw gunfighting power, you can make do.

At the same time, I believe having shorter range will put you at a disadvantage at different times during the event. You may not be able to fight back if the enemy team shooting at you can shoot 100 feet further than you. This will all come down to the capabilities of your gun alone. Speedsofters will use very short barreled rifles and pistols to stay light and to get the gun on target as fast as possible. However it is hard to maximize your range and accuracy if your barrel is very short. Moving over to a longer rifle might effect the way they perform in close quarters, but it can help bridge the gap when transitioning to a larger playing field. 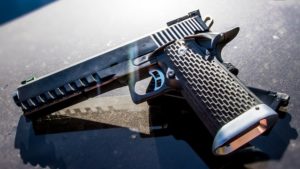 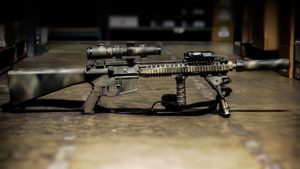 How Do You Fix It?

This comes down to doing some pre-game reconnaissance of where you will be playing. MILSIM players will look at maps and look at videos of previous events at a particular site to optimize their gear. Most SpeedQB loadouts tend to work a majority of close quarters oriented fields/arenas. This can often be a big shock to the SpeedQB player playing his first or second MILSIM game without doing the right research.

With all of these topics in mind, how do you think Speedsofters would perform at a MILSIM event? Even with these “issues”, a coordinated team can do a lot of damage and change the tide of the game. Violence of Action, the key ingredient in successful speedsofting, still has a place in MILSIM.

Stay tuned for part two where we talk about why Speedsofters would do great at a MILSIM event!