Why are Short Barreled Rifles so Popular? Pistol Caliber Rifles?

Why are Short Barreled Rifles So Popular? Pistol Caliber Rifles?

The craze of smol guns has taken the Airsoft and Real Steel Industry by storm. Staple guns like the G&G Arp-9 and 556, along with the Classic Army X9, PXG-9, and AR4 have left a mark in Airsoft. The start of the pistol caliber craze began with those models. Indoor play and the need for lighter, more compact guns has gone up non stop for the passed couple years and I think I’ve got a pretty good grasp on why. Hear me out.

The Airsoft world and firearms world has been in NEED of innovation. Pistol caliber carbines and SBR/PDW style firearms aren’t a NEW thing. However, in my opinion, they were overshadowed by larger, prettier, “compensatey” type firearms. Again, I’m not speaking about ONLY Airsoft guns or Real Steel. Both have had their fair share of expensive, large, and pretty looking guns … looking at you Warsport LVOA-C. Love that gun, in Airsoft at least. I don’t have an extra arm and leg to sacrifice to get a real steel one sadly. But back to short guns … I think that they are the next “wave” or craze. For a while it was the larger guns i.e MK18, Block 2, 416 and 17 builds. On Airsoft, it was to emulate our current military and what they use. In real steel, I believe the tactical application of such style guns look really nice on camera and are very effective in real combat scenarios. It just makes sense. Complex movements, mozambique drills, transition drills, all these flashy movements and or practical movements work nicely on camera and for training purposes. Why have a short barreled, smaller caliber firearm when you can have a full length MK18 build with a larger round and round count? For Airsoft, it was because v2 gearboxes and m4 parts are easily accessible, comparative to other styles. It just worked. But this has been the case for a long time and I think everyone wanted a new wave to ride. All the applications have been practiced. With “Operator” social media presences came a constant need for innovations in order to captivate the fans/viewers. Introducing the new “Craze” hidden in the shadows of full length firearms. 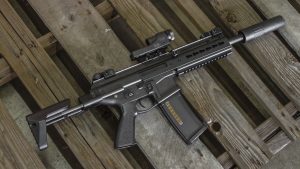 SBRs and PDWs have taken this market by storm, but has not yet over saturated it yet. The Krytac PDW and SDP were very popular when they came out but have always been overshadowed by the LVOA and the CRB. With the popularity of these “longer guns” dying down and the popularity of high speed, CQB play rising … the SDP and PDW lok a lot more promising. Guns like the G&G ARP9 and the Classic Army X9 began to emerge to offer a different approach to the CQB gun game. Instead of an M4 … here’s an, uhh .. M4! But with a stick, 9mm magazine! All jokes aside it was actually a really cool design and concept. Seemingly, around the same time, real steel and Airsoft began to adopt the pistol caliber and pdw persona over the more recent, long style guns.

Being an advocate of indoor game play, these guns suit my play style very well. I like being very hyper aggressive and it is boatloads easier to do so without 16 Inches of metal rails slowing me down that is for sure. The Classic Army PXG9 and X9 sport super compact 3-4 inch rail systems, with the PXG9 being full polymer and lightweight. The X9 not being much heavier and, just like the PXG9, uses stick type pistol caliber type magazines. Others like the Ares M45 and the ARP 9 are also very solid options as well!

On the Real Steel side, the only Pistol Carbine I’ve ever fired is the CMMG Banshee and oh my GOODNESS if it wasn’t the smoothest shooting thing I have ever experienced. It was like I was firing a Gas Blowback Rifle in an Airsoft game. The gun was light, the recoil was minimal, and it wasn’t too loud, albeit being a 45. ACP chambered baby gat. Can’t even imagine what the 9mm version is like!

Both industries are heading into the right direction. I like the change and prefer it too. Both in Airsoft and in real steel. God I hope I get my hands on an EVO …