Fortnite came into the gaming world a few months ago. It quickly became one of the hottest topics on YouTube and has influenced many YouTuber’s. Today we will be looking at some guns from Fortnite that are in Airsoft.

The Pistol in Fortnite is not the gun to use for that Victory Royal run. We highly recommend getting rid of it ASAP. It might save 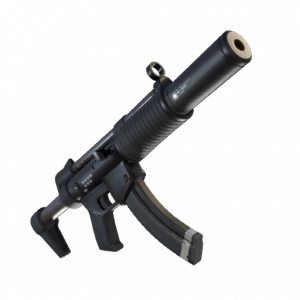 you once, but it isn’t going to get you that dub.

The Suppressed SMG is definitely a step up from the Pistol. The Suppressed SMG has a high ammunition count and good rate of fire. It is a good interim weapon to get you into the top 20. Lack of Range and Damage is this weapon’s Achilles Heel. Consider a different weapon for a Victory Royal run. 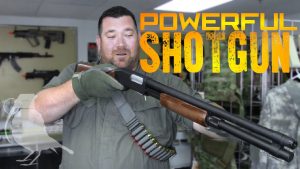 The pump shotgun is deadly at close range. Offering high damage and plentiful ammo, it’s a great back up for a Victory Royal! We highly recommend that you keep a longer-range primary. When you’re getting that last second looting in a shrinking circle, it might save you!

The M4 in Fortnite is actually more of an M16. Featuring a full stock and an 18” barrel it’s far from a “Carbine”. Regardless, the M4 offers good damage, good range, and low recoil. The M4 isn’t 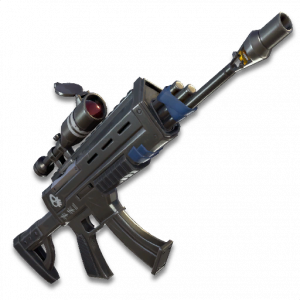 the go-to weapon of choice for a Victory Royal run. Although, it has seen its fair share of wins.

The Scoped AR is a step up from the M4. Offering a higher damage, more range, with a slight decrease in rate of fire. Keeping distance between yourself and an enemy is a big factor in getting a win. Be cautious about getting too close. It’s hard to snap between multiple targets at shorter ranges.

The Bolt Action is perhaps the most iconic gun in all of Fortnite. It’s mostly a one hit kill and is often found with plenty of ammunition. Range is absolutely fantastic and it can definitely take you the distance. Just like any other extreme range gun, keep a secondary for those closer engagements! 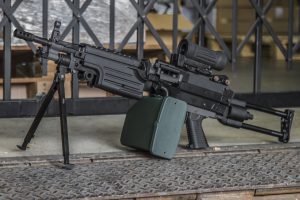 The LMG is one of the most intimidating guns in Fortnite. The LMG can lay down high volume of fire and shred through any wood cover. Often found with one belt the biggest draw back to the LMG is ammunition. It seems like it’s always running dry. Our recommendation is that you stock up ammunition and use it in the final 15. Giving you plenty of time to gather up ammo. This’ll allow you to bunker down and lay waste to others.

The LMG is intimidating, the Minigun just makes people turn and run. One of the rarer items in the game, the minigun is literally a game changer. It features the same drawbacks as the LMG and slightly less accurate. It makes up for it with a much higher rate of fire. We still recommend putting it away until you’re in the final 15.