History of the HK416 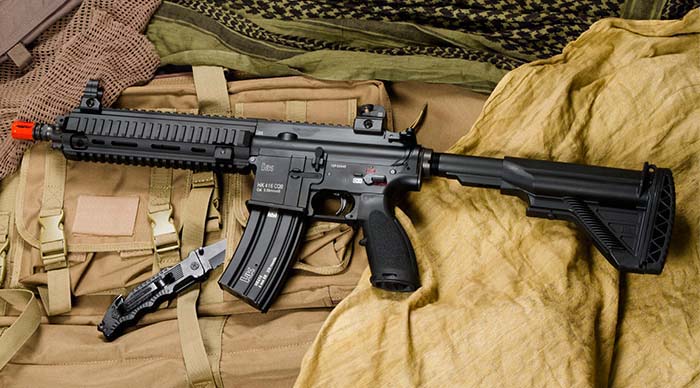 The Heckler and Koch 416 is an exceptional weapon of today’s modern battlefield. Based off the original M4/M16, H&K successfully improve on the design by greatly increasing the reliability of the weapon system. It is so dependable that current United States Special Forces utilize it as a primary weapon such as elite teams like Seal Team Six. During the raid on Osama Bin Laden, Seal Team Six’s weapon of choice was the HK416 making it the gun the killed the extensively hunted terrorist.

Created and designed by the world famous small arms manufacturer, Heckler and Koch, pronounced coke in English, the HK416 is another outstanding weapon from the well established manufacture. The company was founded by Edmund Heckler, Theodor Koch, and Alex Seidel in 1949 which originally manufactured parts for house hold items such as sewing machines and bicycles. Over the past half century, Heckler and Koch have become a leading small arms and light weapons manufacture creating many of today’s well know guns such as the G3, MP5, PSG1, G36, Mark 23, USP, and countless others. The company’s motto of “No Compromise” holds true in their creation of the HK416.

Designed and developed for United States Special Operations Forces, the HK416 is a major improvement over traditional M4 and M16 type carbines and rifles. The advantage the HK416 has over M4/M16 is reliability. The standard issue M4 and M16 utilize a gas impingement operating system which guides high temperature/pressure gases from the round onto the bolt and bolt carrier to cycle the weapon. The issue with this system is the large amount of heat transfer to the internal mechanics along with rapid fouling up creating a constant need for cleaning and maintenance.

The HK416 thrives because it uses HK’s proprietary gas piston system which can also be found on the G36. In this system, the extreme gases from firing the weapon activate a short-stroke gas piston cycling the weapon instead of extreme gases. This system “…does not introduce propellant gases and carbon fouling back into the weapon’s interior, making it the most reliable of any M4/M16 type weapon.” – hk-usa.com. 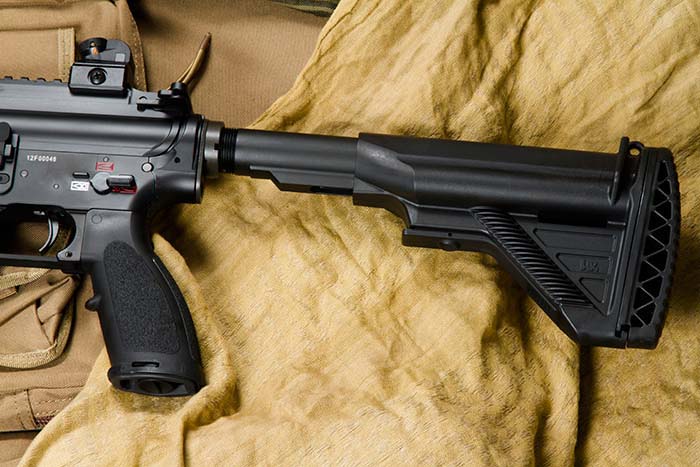 The airsoft version of the HK416 has authentically been replicated by Vega Force Company, also known as VFC. The company was founded in 2004 beginning as a small custom workshop and grown into the renowned airsoft company we see today. They are regarded for high quality internals and great attention to detail on externals. Similar to the real steel HK416, the VFC version can be best described with one word; reliable.

The first thing that comes to mind when picking up the VFC HK416 CQB is how satisfyingly solid it is. Grasping the pistol grip, I feel I have complete control of the gun as it is firmly installed to the lower receiver creating the illusion that they are one. The grip is slightly larger than traditional M4/M16 grips which is fitting for larger hands; however, still not uncomfortable to wield with average sized hands. The weight feels reassuring giving me confidence of its full metal exterior and is not overly hefty as to cause concern for long term game fatigue. Upon testing for wobble between the lower receiver, upper receiver, and RIS, I discover that there is none. The free float RIS is cold to the touch and triggers a thought of caution in my mind as I notice I could potentially scrape my hands on the bare rails due to the extremely precise machining. Note to self, utilize rail covers or vertical grip. Moving to the rear, I examine the HK crane stock. Similar to other M4 stocks, this one is adjustable to five different positions. A characteristic that stands out is the mechanism that is used to operate the adjustable stock. It is recessed into the stock making it incredibly unlikely to accidentaly activate. This is a pleasant improvement from traditional stocks to prevent accidentaly extensions. The stock possesses slight movement between the buffer tube but is no cause for alarm being well within the standard for most airsoft M4s if not better. I also notice that the stock becomes more solid the closer it is adjusted to the lower receiver. It also offers four different slots to attach a sling.

Being well acquainted with M4/M16 style of guns, picking up the VFC HK 416 CQB for the first time is tremendously familiar. Controls were designed to be similar to the M4/M16 and the HK416 has done exactly that. The selector switch is located on the left side of the gun making it right hand user friendly. When switching between the different fire modes there is a definitive “click” that can be felt and heard. The magazine release is located in the same position as the M4/M16 making magazine changes natural and effortless. I notice that the spring installed on the magazine release is strong giving me confidence that the magazine will only release when intended. As expected, the forward assist is cosmetic which is true for most within airsoft. Gaining access to the battery compartment is remarkably trouble-free and simple. The rubber butt pad mimics the real steel faithfully and is removed by twisting 90 degrees counter-clockwise. Working with a Tenergy 9.6v 1600mah crane stock battery, I was able to install the battery with great ease as it slid gracefully into place. After another 10 seconds of arranging wires and plugging it in, the butt pad was reinstalled completing battery installation. 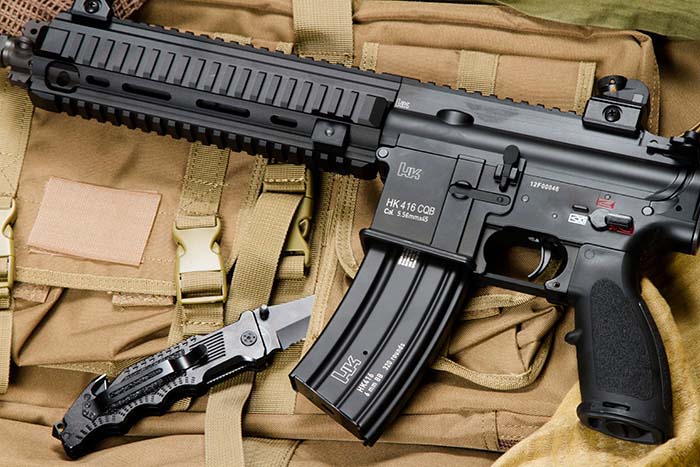 After spend a little more time with the VFC HK416 I continued to be impressed by the attention to detail. The gun’s exterior is packed with trademarks creating a visually appealing gun. Being fully licensed by Umarex, there are a total of five HK logos on the gun and text that reads “HK 416 CQB Cal. 5.56mmx45” among others. The charging handle is fully functional which will snap open the dust cover when closed and will also lock back the fake bolt granting access to the hop up adjustment. This feature is much appreciated as the user no longer has to simultaneously operate the charging handle and hop up dial. Most bolt catches on airsoft M4/M16 are aesthetic but on the VFC HK416 it will release the fake bolt forward when pressed. Although this feature has no affect on performance it is a great example of VFC’s meticulousness adding an excellent touch of realism. I find myself tinkering with this feature by locking back the fake bolt with the charging handle and slapping the bolt catch for a few minutes before I regain focus on my task at hand.

The iron sights are easily removable with a standard Philips screwdriver. The rear sight features four different settings that are clearly labeled in orange from one to four. One acts as a close range sight being the largest aperture with four for long range shots being the smallest. As anticipated, two and three are a middle ground between the two extremes. The rear sight can also be adjusted for windage with a Philips screwdriver; however, the front sight is not adjustable but does not cause concern for alarm where the user would be able to sight in the gun sufficiently with the adjustable rear sight. Right as I believed I had learned all the details about the HK416 I find one more hidden surprise. On the real steel HK416, the base of the pistol grip reveals a small storage compartment. The VFC version attempts to replicate this feature with a removable base plate at the bottom of the grip similar to the real steel version. Due to the requirement of the motor in the pistol grip there is no actual storage compartment but effectively demonstrates VFC impressive attention to detail once again.

After becoming well acquainted with the gun I come to find only a few details to be improved upon in my opinion. The addition of a sling point between the buffer tube and lower receiver would be helpful. Many M4s come standard with them but seeing as the real steel 416 does not come with one I can understand why VFC didn’t add one as well. Another small gripe would be the larger sized pistol grip. My hands are towards the smaller size and find it not as comfortable as normal M4 grips. Equipped with a standard Version 2 gearbox, another pistol grip of choice can always be installed later. My final complaint would be the lack of a quick spring change feature. Granted, there are only a few airsoft guns on the market today which allows FPS to be changed swiftly but this ability would add to an already impressive list of features.

With no details spared externally, the same can be said for the internal workings of the gun. The gears are self shimming and are made of full metal. The piston is made from a strong polycarbonate increasing the longevity of the guns lifespan. Compression parts fit together flawlessly consisting of the cylinder, cylinder head, piston head, and air nozzle. Together they create consistent air pressure to send the bb flying shot after shot. Another major advantage is the existence of an o-ring inside the air nozzle which gently squeezes around the cylinder head for improved compression. The inner barrel reaches 275mm in length and is made of brass. The powerful motor provides a snappy trigger response and high rate of fire. Most AEGs out of the box shoot around 12-14 bbs per second and the VFC HK416 CQB far exceeds that. (Continue reading for shooting results.) Upgrade ability is a plausible option as the Version 2 gearbox used is ready for many aftermarket upgrades for those looking to push their gun further. Overall the gun is a pleasure shoot putting bbs down range exactly where needed.

To test fire the gun, the Walk In-Store’s large 8.4v 4200mah battery was used with KWA .20g bbs. After adjusting the hop up to preferred performance, the 416 clocked an impressive 17 bbs per second with the lower voltage 8.4v battery and chronographed consistently between 355-360 FPS. I noticed that the FPS didn’t fluctuate much between those recordings and will assist with shot to shot stability. An accuracy test was conducted at the indoor range from 6 yards away (18 feet) while resting on a cardboard box to steady the shots. The smallest aperture sight was used to increase consistency. Accuracy results are as follows:

A range test was also attempted but failed to gather conclusive data as a 5-10 mph wind was present directly against the direction of shooting. From what I was able to view, the bbs traveled well beyond 100 feet with consistency failing further out due to the heavy wind. Without the presence of wind I would imagine the short 275mm barrel would fair decent at an outdoor field but may come up short on longer ranged engagements. 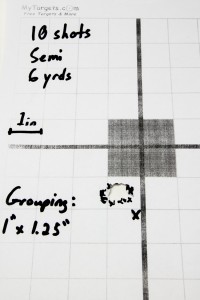 As the shooting results clearly demonstrate, this gun is very effective in sending bbs precisely where desired. This model in particular was designed to be a CQB weapon and the groupings that were attained will more than suffice in any CQB environment. The faster rate of fire is also a great advantage where sending more bbs downrange is always a benefit. It was unfortunate that a range test was inconclusive due to heavy wind; nevertheless, I would not be afraid to take this gun out to a longer ranged field and remain competitive.

For $449.99, I would expect a lot from an airsoft gun and the VFC HK416 CQB delivers. Externally the gun is absolutely superb with many features and details far surpassing competitors. Internally the gun performs well above standard AEGs and can be relied on to last. Familiarity is a great benefit as the user does not have to learn how to manipulate the weapon efficiently. The price tag is high but if you are looking for a gun with “No Compromise”, the VFC HK416 CQB may be the gun for you.