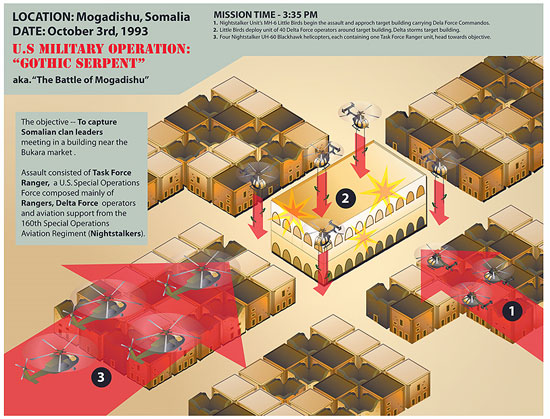 This battle is the perfect example of a great plan gone wrong, as an rocket propelled grenade launched by Somalia Militia struck a UH-60 Black Hawk designated Super 6-1. The helicopter crashed down and immediately the mission parameters had changed to a rescue operation for downed American pilots in a increasingly hostile city.

On the other side of the city, a second UH-60 Black Hawk designated Super 6-4, was shot down by a militia RPG. The situation had turned from bad to worse. At the crash site of Super 6-4, two Delta Force Snipers, MSG Gary Gordon and SFC Randy Shughart volunteered to make a rescue attempt. This action posthumously award the two with the Congressional Medal of Honor. The pilot, CW4 Michael Durant, was taken prisoner.

By the next morning a relief force comprised of element from Task Force 2-14 Infantry, 10th Mountain Divison, and Pakistani and Malaysian U.N. forces arrived at the first crash site to safely evacuate the trapped Rangers and Delta Force operators. In the end, 18 Americans were KIA and 73 were WIA during the battle.

It is through the courage and willpower of the American forces that allowed them to survive such overwhelming odds.

John Lu, the creator of Operation Lion Claws conducts Operation IRENE, a MILSIM event to pay tribute to the Battle of Mogadishu. Airsoft GI sponsors, and participates, in this event in order to honor those that died protecting America.