My first foray into airsoft milsim operations began about 2 years after I first discovered airsoft. While I was searching online forums for a new shotgun load out I was working on, I came across a very interesting poster for something called Operation Iron Angel. You can see a few of the original advertisements below.

Now, as a testament to how long ago Operation Iron Angel occured, the video that came out for this operation was released… on VHS.

Yeah, let that sink in. I feel old.

Regardless, I showed all of my friends who’d just purchased airsoft guns a few promo photos for the event and what the game play was likely to entail, and let me tell you they were all in. Immediately following my little meeting, all of us split up to begin planning what we would need for a weekend of airsoft and how we were going to get there. Luckily, all of us were about to graduate high school and most of our parents were already organizing a small senior trip for us. Thankfully, we were able to convince them to help pay for part of our travel costs in lieu of a senior trip and we were on our way!

By the time Operation Iron Angel came around, every one of us had made some drastic changes to our individual load outs. In hindsight, I think I may look a bit absurd in comparison to everyone else. I already had a Classic Army Version 1 MP5, but in preparation for the game I added a fore grip with a flashlight/pressure switch as well as a mock suppressor. I also switched out the fixed stock for a retractable one, then purchased a Blackhawk crossdraw vest, Blackhawk balaclava, googles, Motorola talkabout radio with headset, camelback hydration system, SMG magazine drop leg pouch, and extra MP5 magazines.

It’s probably also worth mentioning that while I was at OP Iron Angel, I was also in the market for a “field gun”, basically an airsoft gun that I could upgrade to use solely for outdoor games. Luckily, there were a number of retailers there that weekend and I actually purchased a Tokyo Marui M16A2 along with some extra magazines at the event which I used for that last half of the second day. In the photo below you can barely see my new airsoft gun, but you can seemingly make out the awful looking vest I’m wearing which was a backup vest we’d borrowed from our friend’s dad. Surprisingly, the vest, which was meant for fishing, worked out really well and I was able to hold all 8 magazines I purchased the previous day. 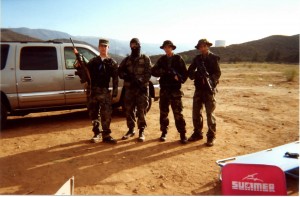 I’m including another photo that I took a few weeks after OP: Iron Angel when I finally got my gear set up to work with my TM M16A2 properly. I think the setup below looks much more tacticool than what I was running at OP Iron Angel, but it really all boils down to personal preference when it comes to what you’re using. Also, just in case someone is wondering, the clock on my camera was never set, so please forgive the incorrect time code. 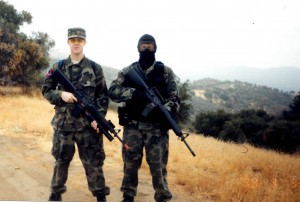 Alright, so guns and gear aside, my first experience with milsim was not as daunting as it can be for some people. I showed up early, in uniform, and with all the necessary documents and equipment. Those are a few things that generally need to be taken care of ahead of time in order to have a comfortable experience at any milsim event. The CO and platoon sergeant for our platoon were incredibly nice guys and introduced us around to the rest of the platoon then went over our objectives and radio frequencies for the day with us until the first game began.

Now I don’t have any photos from the first game, but to summarize the battle, we were tasked with taking over the only airfield… and we took it. We took the hell out it. Seriously, we fought over the airfield for the majority of the 3 hour evolution and we only took it right at the end when the opposing forces ran out of rockets with which to stop our deuce and a half troop transport.

This battle for the airfield was also my first experience with land mines, and it was rather illuminating. As I was bounding from cover to cover down the airfield with my fire team, I noticed the corner of a small piece of paper sticking out of the ground a few steps in front of me. I took a few steps toward the next piece of cover as it occurred to me what an odd place it was for a piece of paper to be sticking out of the ground when-BOOM!- a land mine goes off right under me and the next thing I know, I’m on my back looking up at the sky. After a second or two, I looked around and noticed that everyone in my fire team had been blown off their feet and were just coming to their senses. Seconds later, one of my good friends Chris Dane, now the platoon medic, came running up and started bandaging us so we could get back into the fight. I remember getting up, looking across the airfield, and seeing a rather portly gentlemen operating a control panel look up at me, smile deviously, and then give me a thumbs up.

I was later informed that a majority of the pyrotechnics crew recently worked on the movie Black Hawk down. I gotta give credit where credit is due, that was one powerful land mine and whenever I bring it up around my friends, to this day, they know exactly what I’m talking about. 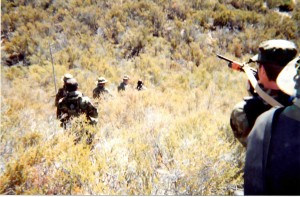 Now the second mission was quite a bit more exhausting than the first, yet nonetheless incredibly gratifying. Our platoon was tasked with marching completely around the field of battle in order to attack the enemy HQ from behind. Unbeknownst to our platoon commander, our starting position was about a 3 mile trek around the edge of the battlefield from the enemy HQ. As you can see in the photo above it wasn’t exactly the easiest hike but we got it done.

Now, even though it took us the vast majority of the 2nd game to get into position, what happened when we got there made everything worth it for me. My squad took up position on a hill to the rear of the HQ as the rest of the platoon made their way to the edge of the compound in order to get as close as possible to the enemy camp before opening fire. 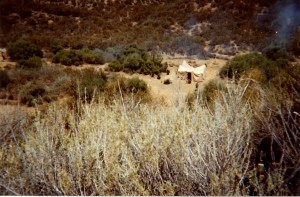 Right as we were given the order to open fire on the enemy HQ, a vehicle could be heard approaching our position down the path that the rest of our platoon just took to get into the fight. As the vehicle came into view my eyes widened, it was clearly a Humvee with a minigun mounted on top and it drove right up to where our squads on the ground were and opened fire. It took out most of our platoon in less than thirty seconds.

All of us on the mountain knew that we had very little time before we were dead meat as well so we just tried to put as many bb’s onto the enemy camp as we could before we got shot by the mounted minigun. That’s when the enemy snipers started firing on our position from another hill as well and we started taking “casualties” fast. Since we were so far away from respawn there was no way any of us were getting back in the fight before the evolution ended so we just had to suck it up and try our best to get rounds on target… and that’s when something awesome happened. 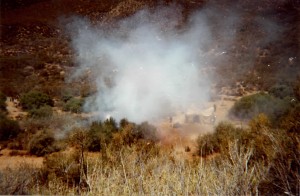 As everything started going horribly wrong for us on the hill, someone popped a smoke grenade near the front entrance to the enemy HQ and that’s when we started to hear something else, a large group of men screaming their heads off. Our sister platoon hit the enemy HQ from the front with everything they had and with the enemy’s attention on us, no one even saw them coming until it was too late. Ten minutes later our forces were breaching the HQ tent and the game was called. Let me tell you, it was a long walk back, but I was smiling ear to ear.

For some people, all that time walking, huffing and puffing, for just a little bit of airsoft action might not seem worth it. But to me, you just can’t get that same adrenaline rush if you’re playing in your backyard or at a small course as you can when you have hundreds of people battling it out on a large field, with guns, grenades, rockets, mines, armor, and the infamous minigun. It’s certainly not for everyone but it changed the game of airsoft for me forever.

Now, I was hoping to be able to write about building my first ghillie suit as well as my experience commanding a squad at my hometown field for Operation Lion Claws I, but it appears I’ve already gone on for far too long, so that will have to wait until my next article.

For now though, I have included one little photo from my experience at Operation Lion Claws VI that reminds me why I love going to these events so much. No matter how serious the event may be, or how tired everyone is, or if you even know anyone else at the game, there will ALWAYS be time for one last minute light saber battle. 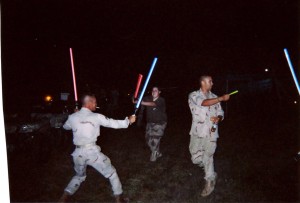 No one told anyone else that they were bringing light sabers, but once one light saber came out, you could hear ten more powering up and then it was ON!