Definitely not a Flamethrower No-siree

hi hello good morning what an excellent day haha man you know what would be crazy is if people were turning airsoft guns into flamethrowers after being inspired by the eccentric billionaire that lobbed a sportscar into space haha wow man 2018 sure is wild huh? 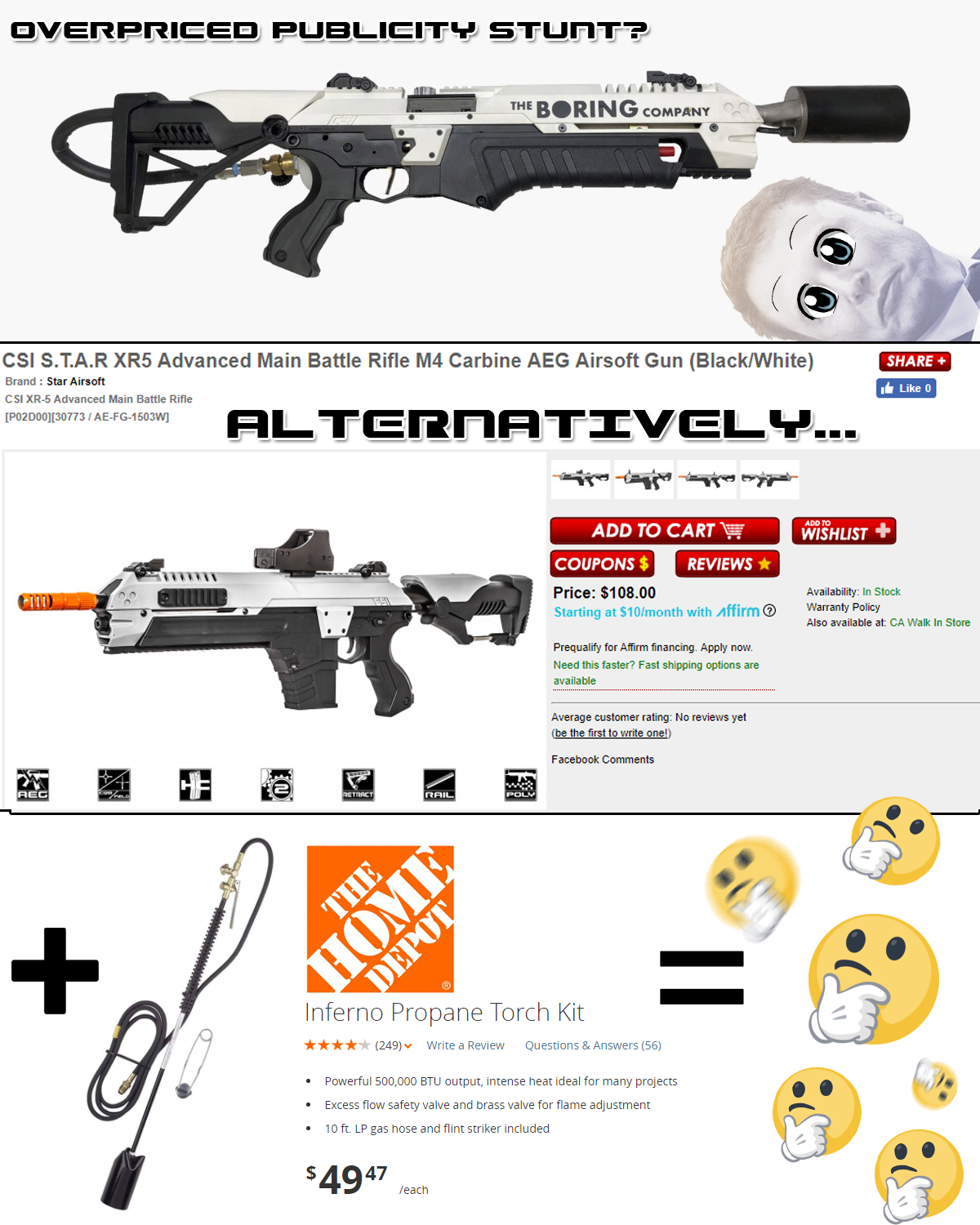 Carl Broke the Internet: A Followup on the Role of the Sniper 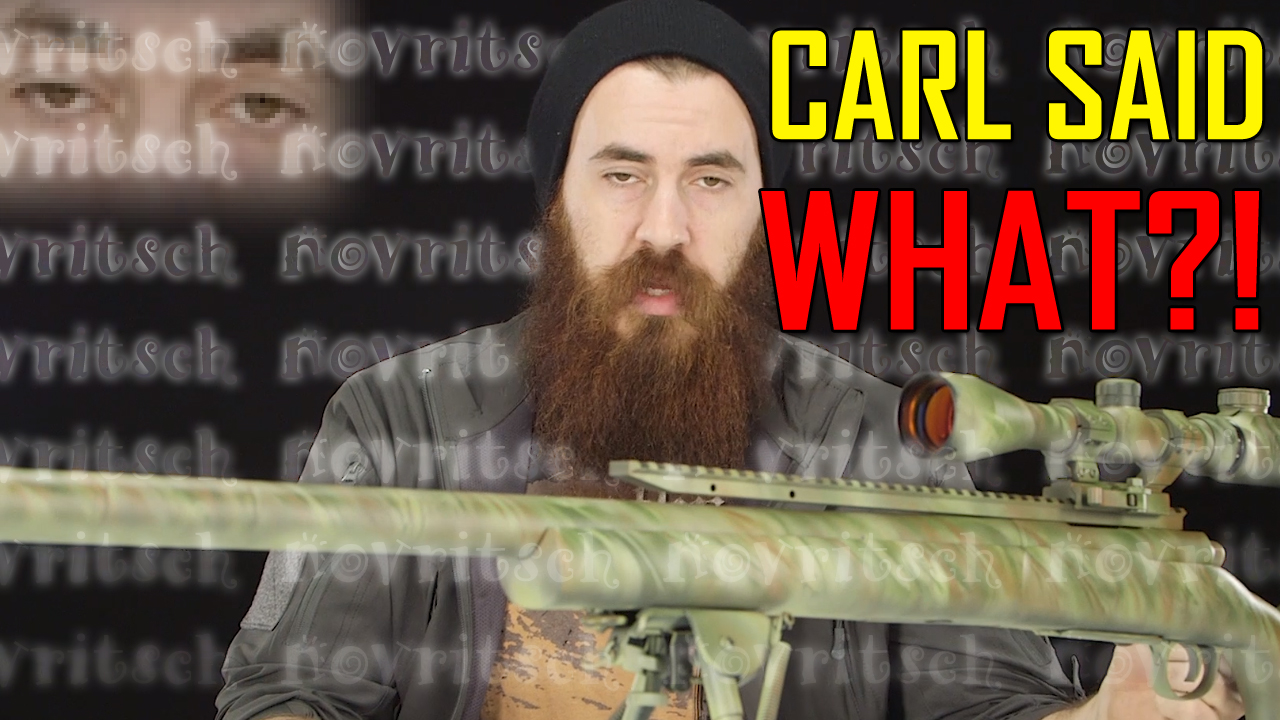 What’s up guys, it’s Carl. I wanted to jot down some thoughts over on the blog because I think my last video needs a little bit of added clarification based on some of the negative reactions I’ve seen online to it, and I think there’s a lot of misunderstanding going on here, so let’s try and dispel it.

Now, I’ve only started doing videos for the channel recently, so I understand that probably the vast majority of you don’t know me, and that’s my fault to some degree, but I have been playing airsoft for nearly 15 years in one capacity or another, and I’ve been working in this industry for more than 10.

When I’m giving you hot takes in videos like this, it’s because these are all things I’ve actually seen with my own eyes, consistently, from my tenure playing this silly hobby – but these are just my opinions, and however controversial they are, guess what? We’re now having a conversation about it! Isn’t the internet wonderful?

It feels like we’re having a bit of miscommunication here, and honestly this is something yesterday’s video should have touched on. A ‘sniper’ is a person. A sniper rifle is a gun. They get used interchangeably quite often, but when I’m saying that, in my opinion, most snipers aren’t much of an asset to the team, I’m referring to a player that has specifically chosen to go out into the field with a bolt action rifle.

Now yes, very obviously there are some famous airsofters that are very good at sniper gameplay- novritsch, jet, swampsniper, the list goes on. What I thought I made clear in the video but perhaps didn’t given the reaction to it, is that these folks are anomalies – exceptions to the rule, and definitely not the standard. Their content is really enjoyable and entertaining, but part of the reason that they’re able to go out and do what they do is because they do have an understanding of stealth, fieldcraft, and when to take shots versus when to lie in wait. Absolutely no shade was meant to be thrown at them.

The disconnect, however, is that their impressionable young viewers then assume that a novritsch gameplay video might just be what an average round of playing as a sniper is like, and without that experience in fieldcraft that I mentioned, this will very likely not go well for them. I can’t count the number of times I’ve seen a bright eyed, bushy tailed new player that just bought a new sniper rifle end up returning it after a few days because the role really isn’t as glamorous as they thought it was going to be – or worse yet, they might just decide that airsoft sucks in general, and decide to call it quits altogether.

Without new players, scenes get stale, whither, and eventually die – and one of many ways that we as a community can counter that process is by being realistic about what one of the most hyped roles in the game actually entails. Additionally, I was mostly referring to larger fields and more milsim oriented gameplay, as that’s kind of where you’re going to get the most value out of being able to sneak around and scout and such, but I thought that was obvious. Maybe it wasn’t, but I thought it was!

A tool is only as good as the hands the wield it – so obviously sniper rifles aren’t useless, otherwise I wouldn’t have taken the time to build and paint the M24, but a ton of folks who go out and attempt the role could be doing it much, much better, and that’s specifically what I wanted to address.

And you know what? That’s my opinion! I specifically invited dissent in the comments because I knew this topic would draw some criticism, and to those of you who’ve been chill and contributed to good counterpoints or even just realized how tongue in cheek this entire hobby is – thanks! Carl salutes you. I sincerely hope that clears up a bit of confusion and dispels the idea that I was trying to put anyone down or make anyone feel bad – I definitely wasn’t. That being said, if you still have thoughts or comments you’d like to share, by all means, keep going! I FEED ON YOUR HATRED naw jk. Have a great weekend guys – go prove me wrong with a bolt gun

Snagged a sweet gun for the holidays, or know someone who did? Peep these quick beginner tips to make sure you get started off smoothly!

Send this to a friend!

• Always make sure your hicap magazine is fully wound, and contains enough BBs to feed rounds consistently. An unwound magazine, or one that isn’t full enough to feed properly, will not function correctly.
• Never use poor quality BBs! These can jam the gun and damage your internal components. Only use BBs from a trusted airsoft specialty retailer – avoid sporting good stores.
• Make sure to monitor your battery while charging it! A full battery charge will take approximately 4-6 hours on a standard wall charger. Do not charge the battery unattended overnight, as this can damage or kill the battery. 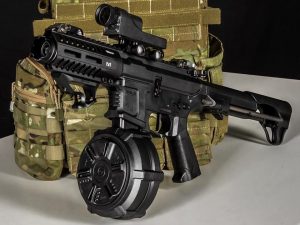 The Crossdraw vest is not an end-all, be-all platform, but it will accomplish everything you need and more for the player that is looking to get started with something inexpensive and versatile!

Many new players often ask us about the importance of load bearing gear, and a fantastic option when you’re just getting into the game is the Crossdraw Vest. Though it might not carry everything you might eventually need, the basic Crossdraw generally has pouch real estate for most items you’ll need as a beginner.

Everyone’s preferences vary quite a bit, but as a general rule of thumb, you’ll want to carry enough magazines to get you through a game and back to the staging area, a sidearm in the event your gun goes down or for clearing tighter spaces, and enough magazines to keep said sidearm running. Most folks will also attach some kind of dump pouch to their vest, plate carrier or belt kit, allowing them to quickly and easily store expended magazines rather than fiddling with getting them back into the pouch when you need to get your gun up fast. It’s always advisable to have a spare space for other miscellaneous items you might want to bring with you too – pens, a notepad, a small first aid kit, etc.

If you couldn’t tell where this was going by now – a Crossdraw Vest handles all of these duties with ease!

While not as modular as a pure MOLLE platform, these vests are a great way to get out and play with minimal both minimal thought given to setup, and a minimal hit on your wallet!

Looking for the best way to get into airsoft? Search no further! Checkout our New Player bundles, featuring a Lancer Tactical Gen 2 M4, a few mags, the Crossdraw Style vest we’ve outlined above, Elite Force BBs, and a Paintball style mask for face protection. Check it out!

A common question we get asked is, “What’s the best weight BB for my airsoft gun?” The answer is: It’s complicated!

In the video below, we take a look at the most common BB weights used by most airsoft players and run them through a stock G&G Armament Combat Machine. Though every gun will perform a bit differently, this makes drawing general conclusions quite simple. The .20g BB is by far and large the generic industry standard for many users for its reliability and widespread availability. The round is consistent and performs well in many different guns, making it a great all-around choice for AEGs that may be stock or shooting within CQB FPS ranges. You’ll not want to go any lighter than this round for your rifle, as generally most .12g BBs are poorly made and can have casting seams that will damage your gun’s hop up unit.

When your gun is shooting a bit closer to the FPS ranges typically associated with outdoor play, you may want to consider anywhere from a .25-.32g BB. Though you’ll lose velocity of the round due to the heavier projectile, this range of BBs typically produces a more stable flight pattern and increased overall accuracy at range. The .28g BBs used in our video scored the most hits out of all rounds tested, offering optimal accuracy and range from the maximum engagement distance. These BBs are also quite popular for airsoft LMGs at events that allow them to shoot above normal Rifle FPS limits.

Generally speaking, .34s, .43s and beyond are usually reserved for sniper or marksman platforms that have been upgraded extensively, as the extreme FPS these airsoft guns produce are generally unstable with anything lower weight than that. The stock Combat Machine we used in testing was not able to produce enough backspin via the hop up for these rounds to be a viable option in any scenario.

Check out the full video below!